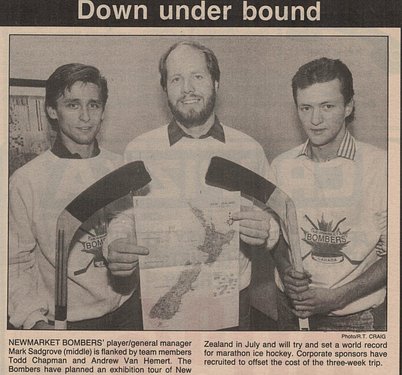 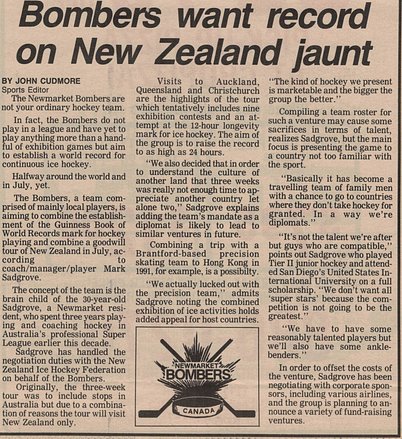 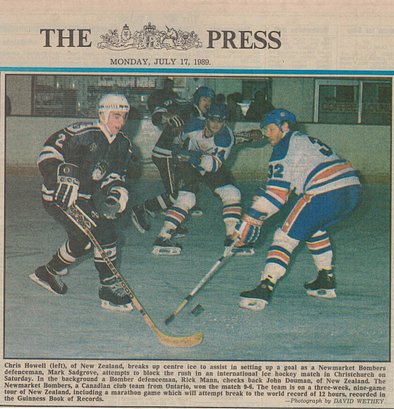 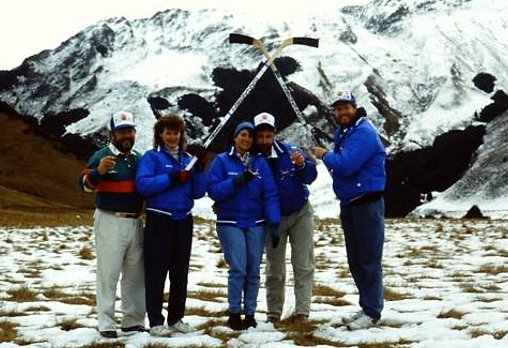 A blast from the past…..

Next year marks the 30th anniversary for the “Moose”!!!

In July of 1989, the inaugural tour to New Zealand set the bar high for what would become annual tours around the globe to play ice hockey.  It all started with Mark’s dream to return to the South Pacific to play hockey after having lived and promoted the sport in Australia for almost three years in the early eighties.

Friends from Australia (Graeme and Tim Avery) joined us in New Zealand for the tour, which was special.

Mark rounded up a group of hockey enthusiasts at home in Newmarket and off we went to New Zealand.  At that time, we were the Newmarket Bombers.  We hadn’t all played together, but  we wanted to travel and spread our love of  hockey.  The rest is history….

The three week tour included visits to Auckland, Christchurch and Queenstown and one of the anticipated highlights of the tour was to attempt to break the Guinness world record attempt at the longest game of ice hockey.  It was a world record and we did it in 32 hours. We played against the Auckland All Stars.  It had to be in constant play like a typical hockey game with shift changes.  The whole team stayed awake.  We had three lines.

The cultural exchange with our billets was fantastic with some lifelong friendships established.

We experienced Maori culture and hospitality at Rotorua, which included a Maori feast and entertainment, including the Haka.

Our veteran, Brian “Chappie” Chapman, celebrated his 49th birthday while on tour.  Funnily, now a forty-nine year old is a “young’un” on our current tours. Chappie would return to New Zealand and celebrate many more birthdays with the Moose in years to come.

Whilst some  players took the plunge and tried bungy jumping  from a bridge in the South Island, two members of the group took a different “plunge”:

Cathy Orr and John Gearin eloped in New Zealand, atop the Remarkables mountains in the Southern Alps, complete with helicopter ride, hockey jerseys and a wedding arch made  of hockey sticks.  It was remarkable, indeed!!!!

One of our players, Ian Bell, came on this first tour, and never came home!!

Ron O’Reilly and the Cravens, on behalf of the New Zealand Ice Hockey Federation (N.Z.I.H.F.), were instrumental in making this tour a huge success.  Huge thanks also went out to Phillipa, Suzanne, and Robin for their organizing efforts in conjuction with the N.Z.I.H.F., looking after billeting arrangements, games and local touring.  They gave us the best in hospitality and fun, which led to annual hockey tours to New Zealand and eventually back to Australia, too.