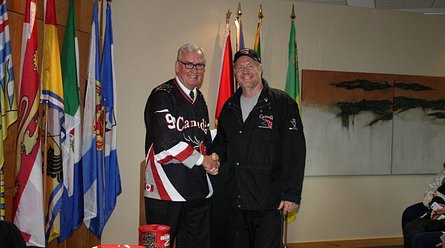 The Canadian Moose have garnered attention from Canada’s hockey elite. When you venture down to the Hockey Hall of Fame in Toronto, ON, Canada, you will find a Canadian Moose jersey displayed in the Royal Canadian Mint World of Hockey exhibit.

In July 1998, the Canadian Moose were officially recognized by the Hockey Hall of Fame for its efforts in developing the game of hockey worldwide. Hockey greats such as Hall of Fame inductee Ron Ellis, NHLPA past president Mike Gartner and commentator Brian McFarlane are among the many active Moose supporters.

Kevin Vickers, former RCMP officer, Sergeant at Arms of the Canadian House of Commons and now Canadian Ambassador to Ireland, becomes an honourary Moose. Mark Sadgrove gave the Canadian hero a Moose jersey of his own during the tour of Ireland in October 2015. The embassy hosted the full team and were an eager audience for the remarks of an inspirational Canadian!